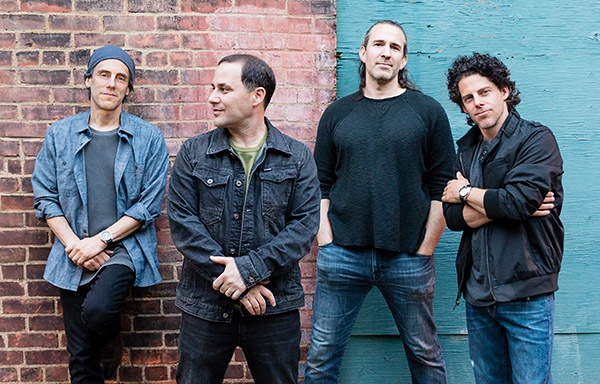 After a full year in the studio and countless performances later, New York City's own SKYFACTOR is back with a brand new album, A THOUSAND SOUNDS. This collection of 11 songs truly represents the acoustic-based rock/pop quartet in its finest form yet, thanks to an even deeper level of songwriting and an ever-growing soundscape.

From the country-ish stomp of the title track to straight-ahead rockers like "Long Way To Go" and "The Whole World's Here", to the gravitas of meaningful cuts such as "Better for the Moment", "Lost At Sea" and "What We Had", the album is full of hooks at every turn, while always staying fresh and unique.

Available now on all streaming services as well as good ol' CD (remember those?), response from fans worldwide has been nothing short of electric so far. Local radio has begun to play the lead single "A Thousand Sounds", which features guest backing vocals from Ninja Sex Party frontman and Game Grumps YouTube star Dan Avidan (a.k.a. "Danny Sexbang").

Formed on a rooftop in the East Village of New York City over a decade ago, SKYFACTOR was born when the musical paths of longtime friends Bob Ziegler and Jason Taylor (formerly of Michigan's Brother Rabbit) and brothers Jon Rubin and Cliff Rubin (formerly of NYC's Sky Blues) finally crossed. Almost instantly the songs started flowing, and they knew they were on to something.

Their debut album Daydreams received much critical acclaim and notice, including that of MTV's hit show Teen Mom, who chose the track "OK" as their season 2 finale theme, resulting in thousands of downloads and streams from around the world. The band then honed its musical chemistry and style for Signal Strength, which further spotlighted personal, insightful lyrics backed by a big acoustic guitar and one very powerful rhythm section. The guys even had a song from the album prominently (and humorously) featured on Adult Swim's Eric Andre Show, resulting in even more buzz for the band.

But it's the live stage where SKYFACTOR truly becomes a force to be reckoned with, having played pretty much everywhere in NYC from The Mercury Lounge to The Bitter End to The Cutting Room to Arlene's Grocery and The Living Room, to impressive venues like Garcia's at the Capitol Theatre in Port Chester, NY, plus various music festivals throughout the Northeast, including a standout opening slot for Soul Asylum.

Cut to 2019 and just one listen to A THOUSAND SOUNDS proves these guys know how to craft memorable and powerful songs that grab you from the get-go - and won't let go. SKYFACTOR's simple but effective melodies combine with edgy dynamics to take the listener on a ride each and every time.

A THOUSAND SOUNDS - and all of SKYFACTOR's music - can be found on iTunes, CDBaby, Amazon, Spotify, Apple Music and Google Play.