"Streets of New York" is a new song written and recorded virtually during the pandemic of 2020. The video premiered on YouTube during the height of the crisis in New York. 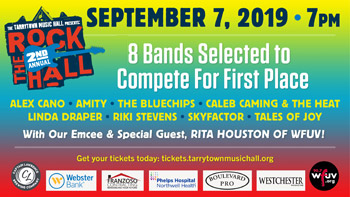 Skyfactor was honored to be chosen as FINALISTS at the beautiful Tarrytown Music Hall at the 2nd Annual ROCK THE HALL, chosen from over 150 NYC-area bands. What an honor to play this amazing venue and stage!

Skyfactor's brand new record A THOUSAND SOUNDS IS OUT NOW!

Now available on CD, download and streaming!
Check out this video to go behind the scenes with the band during the making of this record, including the title track which features backing vocals from Dan Avidan of Game Grumps and Ninja Sex Party!

Skyfactor has just begun recording the follow-up to their acclaimed Signal Strength, recording the full band tracks in Woodstock, and then vocals and mixing taking place in NYC. The new record is due for a Summer 2018 release. Watch this space for more details!

Danny Sexbang is a YouTube superstar with millions of subscribers - and also a long-time Skyfactor fan. Hear him tell the story of discovering us, at the start of this recent Game Grumps video. (And see our Video page for our shout-out back.)

The hugely popular Eric Andre Show on Adult Swim used our track "Come Away" on their season finale. If you've ever wanted to see Jack Black dance to Skyfactor, here's your chance. One of the stranger uses of our music, but we'll take it! Thanks to Eric, his show, and all the new fans who Shazam'd the song and reached out to us from all over the world.

Special Giveaway at Skyfactor's last NYC show of the year

During the show, fans followed @skyfactor on Twitter and Instagram and posted a #skyfactor live photo, and one winner from each was announced ONSTAGE before the last song. They each won a framed, signed band poster, created just for this show. Thanks to all who participated!

IT'S HERE! Our fan-directed New Video

Our official LIVE video for "Carry the Load" was filmed & directed entirely by our fans, live from The Bitter End in NYC. Thanks to the fans and to our talented editor Louis Lucci. Watch the video here!

Request "WAKE UP" on the Peak

Skyfactor's SIGNAL STRENGTH IS OUT NOW!

Now available on CD and download! The band has been playing live shows throughout the summer in support of the new CD, including a private show in NYC opening for SOUL ASYLUM on June 8, and the big CD release show at the Bitter End on June 15. The response to the new record and music video have been fantastic and we thank you all for your support!

To coincide with the release of SIGNAL STRENGTH, the band has finished their first music video, for the single "WAKE UP". The video, directed and edited by Erik Klein, can be seen on skyfactormusic.com and on the Skyfactor YouTube Channel.

Skyfactor heard on NBC's "THE VOICE"

New music website TheTapMusic.com recently did a great video profile and interview with Skyfactor, filmed at the band's show at the Bitter End. Watch the video here!

SiriusXM Satellite Radio was in the house to record Skyfactor's performance at the Living Room on June 16. The broadcast premiered July 17 and repeated throughout the month on "From The Living Room To The Loft", SiriusXM channel 30. If you missed it, you can listen to the show here!

Skyfactor's "OK" was prominently featured as the end theme music for an episode of the popular MTV reality series "Teen Mom".